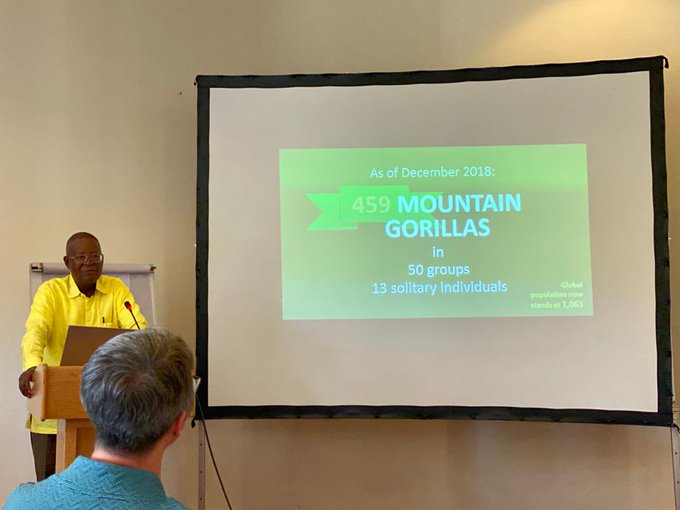 Mountain Gorilla Population Census results of Bwindi Impenetrable National Park and contiguous Sarambwe Nature Reserve released on the 16th of December 2019 shows an increase from 400 members to 459. This brings the global total population of Mountain gorillas to 1,063 from 1004 from the last survey in the Virunga National Park.

The survey was conducted by the conservation Authorities within the protected areas within Ugandan and the Democratic Republic of Congo. It involved over 75 trained survey members working under the transboundary framework of the Greater Virunga Transboundary Collaboration. Partners who supported the survey include the International Gorilla Conservation Programme (IGCP), a coalition of Conservation International, Fauna & Flora International, People’s Postcode Lottery and the World Wildlife Fund (WWF).

The gorilla families are stated to have increased from 36 to 50 with 13 solitary individuals. The increase in mountain gorilla numbers within Bwindi forest undoubtedly came in as good news. There is lots of excitement not only for conservationists but the whole tourism industry and travelers as well. Uganda gorilla safaris are getting better and therefore a perfect time to take a tour to Bwindi to trek gorillas.

Last year the increase of the mountain gorilla population to 1,004 was a success story as this saw the specie moved from critically endangered to endangered. The population of Mountain gorillas has gradually been increasing with the 2002 census showing an improvement by approximately 7% to 320 individuals, about 380 in 2006 with Bwindi alone having about 314 individual in 2006. At this time there were 5 habituated gorilla groups with a total of 76 individuals, 25 unhabituated groups with 227 individuals and 11 solitary silverback males.

The best time of the year for a gorilla tracking safaris is during the dry season months of June –August and December –February which makes it easy to go through the trails. When trails are drier, gorilla trekking is easy since trails are passable and the park is accessible. It is best advisable to track gorillas during the dry season since it’s easy to trek gorillas as well as view wildlife. However, the dry season is actually the peak or high season therefore early booking is recommendable since permits can easily get fully booked as well as accommodation.

How to book for a Uganda gorilla trekking safari

Booking for a gorilla tour Uganda can be one of the complicated trips to plan, however just find the right tour operator to do this for you. Wild Jungle Trails Safaris and Gorilla Trail Safaris have expertise in planning gorilla trips in Uganda and can do all the best planning. 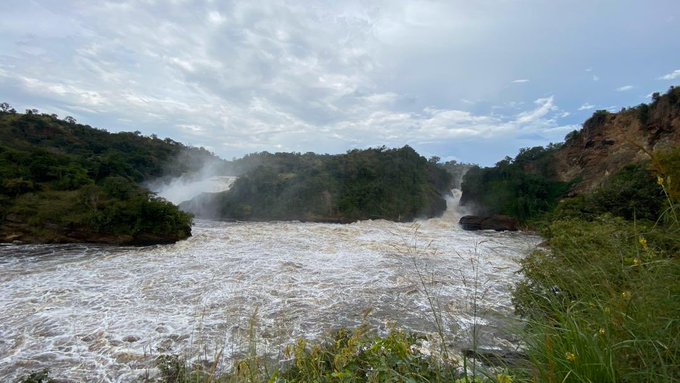 There have been lots of controversies on Murchison Falls and the heated debate led to the save Murchison Falls campaign. Recently, the cabinet gave the south African energy company Bonang Power and Energy (pty) Ltd a green light to undertake feasibility studies on the Uhuru falls. Uhuru falls are just a few meters about 500 away from Murchison Falls and both pour and continue flowing to the same direction.

How it all started

In a letter dated June 20th to the Ministry of Water and Environment through National Environment Management Authority (NEMA) from Electricity Regulatory Authority (ERA), there was an application for a feasibility study for a proposed power dam near the Murchison Falls by a South African Company, Bonang Power Limited.

According to the Electricity Regulatory Authority, Bonang Power Limited was planning to build new hydropower dams at Ayago, Uhuru, Kiba and Murchison Falls to generate 2,550 MW of electricity.

This proposal faced resentment from the time many Ugandans came to know about it especially those from the tourism industry. Amos Wekesa one of the tourism enthusiasts, rejected the proposal and referred to it as nonsense.

“Europe is getting rid of hydro power dams. Uganda lies on the Equator. Why can’t we explore solar. Are these people (Bonang Power Limited) even Ugandans? Do they care?” Wekesa bitterly queried on a statement with soft power.

Many more individual bitterly rejected the proposal and at least 2,533 people signed a petition to stop the planned construction of a power dam near Murchison Falls after the Electricity Regulatory Authority published the proposal for public views.

Wednesday 22nd August, the Minister of State for Environment, Mary Kitutu in a statement to Parliament said that the National Environment Management Authority has not approved the application due to environmental and other socio-economic implications such as tourism.

Kitutu says that after a joint meeting of the ministry of water, NEMA, Uganda Wildlife Authority and Uganda Tourism Board, the ministry rejected the plan.

Kitutu says that constructing a dam will result in flooding at the National Park, which will also affect crocodiles, hippos and other animals, birds in the park.

Meanwhile, the Minister of State for Minerals, Peter Lokeris said a memorandum in cabinet, though not discussed discourages construction of a power dam at Murchison Falls.

The Speaker of Parliament Rebecca Kadaga asked for an official statement from the Prime Minister, Dr Ruhakana Rugunda on the matter.

Just when Ugandans and conservationists thought Murchison Falls was going to stay intact, cabinet decides to allow the Bonang company do feasibility studies of which everyone in the industry knows where this is heading to.

Why Government should save Murchison Falls

Attractions / what to see in Murchison Falls National Park Uganda

Several other wildlife species that can be seen in the park include the waterbucks, bushbucks, Uganda Kob, Jackson’s hartebeest, warthogs, olive baboons, blue and red-tailed monkeys, black and white colobus monkeys, patas monkeys and many more. Aquatic species found in the banks of the Nile River as it continues to flow northwards include the hippos and crocodiles (Uganda’s largest population).

There also the Budongo forest 59 restricted range bird species which include the Dwarf Kingfisher, Goliath Heron, White-thighed Hornbill and the Great Blue Turaco. With these several bird species in the park it has attracted many avid birders and becoming a top Uganda birding safaris tours destination.

Murchison Falls is the highlight of the Murchison Falls National Park. Murchison Falls is a beautiful feature formed as the Nile River waters squeeze through a narrow 7 meters (23ft) wide gap of rocks then plunge into what is known as the devils cauldron, 43meter (141ft) below with a thunderous roar, water spray and beautiful rainbow. The falls actually lends its name to the park. The spot is so spectacular for photography and sightseeing.

The forest trails of Kaniyo-pabidi and Budongo forests south west of Murchison Falls Conservation Area are host to chimpanzees. Chimpanzees can be tracked in the Kaniyo-pabidi and Budongo Forest with about 800 of them living there and habituated for tracking. Within the forest, there about 24 mammal species, 465 plants and 360 birds enriching all kinds of safaris with great memories.

A visit to Murchison Falls Park can be tailored with other destinations in Uganda or also Tanzania safaris, Rwanda tours, Kenya safaris or even long Congo safari tours. For all kinds of travelers including families, groups, solo travelers, Murchison Falls National Park is a rewarding all year round destination that will meet your tour expectations. 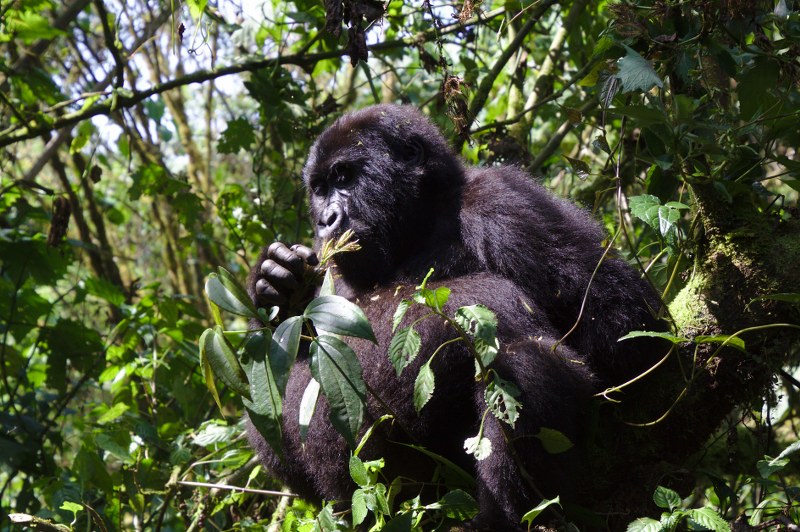 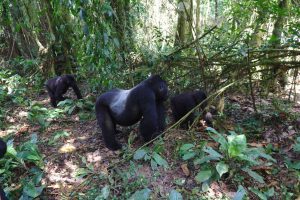 Persons above 15 years of age are eligible to purchase a gorilla permit in Uganda for the only chance of seeing Mountain Gorillas in their natural habitat. Gorilla safaris in Uganda are a wonderful opportunity to see these majestic creatures in their own environments. And the trekking or else hiking experience does not stop at seeing gorillas either.

By taking a longer Uganda safari or combining several short trips, you can see many of the other wildlife that appreciates Uganda as their home. To make the most out of your gorilla trek Uganda, you must be organized and ensure you know exactly what costs you will encounter for the whole trip by requesting for a quote from the gorilla tour operator.

For many people, trekking to see the gorillas of Uganda is a once in a life time opportunity and at Wild Jungle Trails Safaris, we want you to make the most of that experience. Our gorilla trail safaris and treks including the cost of your accommodation, meal plans, guides, transport and gorilla permits.

Our team is always here to help you with understanding the gorilla trekking Uganda price for Bwindi & Mgahinga and helping to find the right package for you. To see our most popular safaris, for Bwindi Impenetrable National Park and Mgahinga Gorilla National Park treks, check out our packages at https://www.gorillatrailsafaris.com or to speak to a member of our reservations team, call us on +256 414 663 115 or +256 777 690 798. 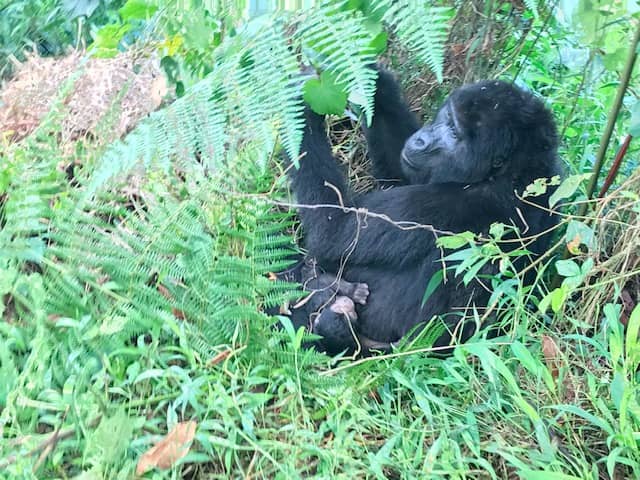 Mubare group, oldest gorilla family in Bwindi gets new baby gorilla on the 16th October 2019 birthed by Businza a female gorilla in the group. Both the baby gorilla of Mubare and the mother are reported to be in good shape.

Yesterday the 16th of October 2019, Mr. Peter Mbwebwe, the Uganda Wildlife Authority Warden in Bwindi Impenetrable National Park confirmed the birth of a new mountain gorilla in the Mubare family. 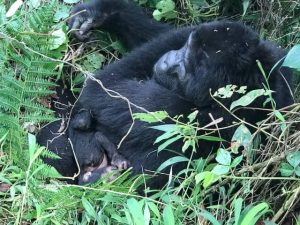 Mother Businza and her new born baby gorilla in Bwindi

The good news as Bwindi gets new baby gorilla come as a success to the strong conservation efforts by the Uganda Wildlife Authority as well as all conservation partners.

Mountain gorillas in the previous year were moved from the IUCN list of critically endangered species to endangered; at least a step to success and this birth comes handy as an addition to this conservation success story.

Previously, mountain gorillas were known to total to about 880 individuals, however with the latest census from the Virunga Mountain parks, the gorillas are known to be about 1004 individuals. This total is not inclusive of latest census information from Bwindi National Park that could increase the numbers. As Bwindi gets a new baby gorilla the future of the Mountain gorillas gets better compared to the risk of extinction they faced not many years ago.

Bwindi Impenetrable National Park has the highest population of habituated mountain gorillas and therefore a perfect choice for a gorilla trek in Africa.

What is the cost for a gorilla trekking safari in Uganda?

This is an increase of USD 100 for each permit. The permit is valid for a single trek with a maximum of 1 hour in the presence of the elusive Mountain Gorillas. Even with this increase Uganda still stays the best option for gorilla safaris in Africa as its still USD 800 less than a gorilla permit in Rwanda.

Why trek Mountain gorillas in Uganda

Other Gorilla Families in Uganda

As per September 2019, Bwindi Impenetrable National Park Uganda is home to 19 gorilla families found in the four gorilla trekking sectors and these are;

Mgahinga Gorilla National Park is the smaller Uganda gorilla safari park with one gorilla family known as Nyakagezi Gorilla Family. The Nyakagezi gorilla family has 10 family members including led by silverbacks Mark and Mafia who took over from their father silverback Bugingo who now happily plays the role of grandfather; there are 2 other silverbacks known as Rukundo and Ndungutse, 2 female adults known as Nshuti and Nyiramwiza and 3 youngsters.

This group is unique for gorilla trekking because the family has 6 silverback gorillas living in harmony within the same group; this is a unique family of all the gorilla families in Uganda.