The Wamala tombs are a noteworthy Buganda historical and cultural site situated in Nabweru sub-county, Wakiso district in Central Uganda. The tombs are the burial site of the infamous Kabaka Suuna II, the 29th King of Buganda Kingdom – the largest traditional monarchy in Uganda. 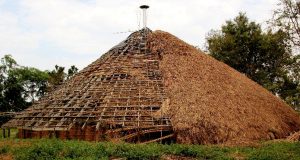 Kabaka Suuna II reigned as the King of the Buganda Kingdom between 1836 and 1856 and is remembered as one of the most despotic and tyrannical kings in the history of Buganda. It is rumored that Kabaka Suuna killed 58 of his 60 brothers and history has it that he gave out inhuman punishments to his subjects.

Kabaka Suuna II is also remembered for being very handsome and it is rumored that he got his looks from his mother Nnamasole (Queen mother) Baagalayaze whom he loved so much. The Kabaka constructed a royal sanctuary for her on Kagoma hill which is not far from the Wamala tombs. A visit to Kagoma hill can be incorporated into your cultural safari tour to Wamala tombs.

Kabaka Suuna II was the first king to admit foreigners (Arab traders) into Buganda in the mid 19th century. The other intriguing fact about Kabaka Suuna II is that he had 148 wives and 218 children. He was also the last king to have his jawbone removed upon his demise. A deceased king was buried without his jawbone because It was believed that his spirit remained in the jawbone which was placed in the royal sanctum and preserved as an important article for rituals and sacrifices.

Ssekabaka Suuna II was the last Uganda ruler to be buried in his palace which is the present day Wamala tombs – a massive and round thatched hut which doubles as a shrine where rituals and traditional ceremonies are carried out by the royal family and other select parties. Inside the tombs are numerous intriguing items including; primordial spears, shields, calabashes, backcloth and a dramatic display of the ‘eternal forest’ which is believed to be the destination where the deceased king went on an unending journey.

After his demise, Ssekabaka Suuna II was succeeded by Kabaka Mutesa I who rose to power and ushered in a peaceful and tranquil reign. He is remembered for being soft-spoken and having a charismatic personality.

A Uganda safari tour to the celebrated Wamala tombs is an opportunity to discover Buganda’s history and culture first hand.