The Baha i Temple 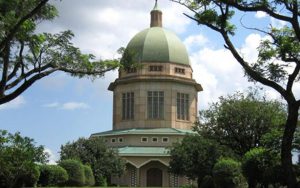 The Baha i Temple uganda

The humongous complex seats on 50 acres of land and include; a house of worship, administrative centre, a guest house and extensive gardens. The massive temple building is more than 130 feet (39 meters) high and more than 100 meters in diameter at the base. The dome rises over 124 feet (37 meters) high and is 44 feet (13 meters) in diameter. The foundation is laid 10 feet underground to ensure that the building stands the test of time and bad weather.

The temple is a fascinating display of delicate beauty and intricate detail – the green dome is comprised of mosaic tiles imported from Italy, the lower roof tiles were got from Belgium, the colored glass fitted in the wall panels was imported from Germany, and the timber used in making the doors and furniture is Uganda’s finest.

The building of the temple began in January 1958 and its dedication was on the 13th of January 1961. The temple was designed by legendary architect Charles Mason Remey and various ‘hands of the cause’ including Musa Banani and Ruhiyyih Khanum offered gift materials for the construction of the sanctuary. The sacred soil was got from the innermost shrine of Baha’u’llah and the fortress of Maku where the Bab (one of the sent prophets) was imprisoned.

The Baha’is faith is a oneness fellowship embracing all denominations and people from different religious backgrounds with a common cause of worshipping God. The faith aims at bringing humanity to a place of unity and oneness with God at the centre. The Cree of the faith is based on the teachings of holy prophets who are believed to be messengers directly sent from God to minister to their generations. These prophets are believed to include; Moses, Zoroaster, Buddha, Christ, Muhammad, as well as Bab and Baha’u’llah who are considered the messengers and educators of this age.

A Uganda safari tour to the Baha’is temple is a chance to explore the humongous facility and encounter its history as well as fascinating beliefs. Besides touring the temple and the surrounding areas, you have a chance to see a wide variety of birds which abide by the temple area. These bird species include; the Red-eyed dove, Crowned Hornbill, African Green Pigeon, Common Bulbul, Pied Crow, Bronze Manikin, Palm-nut Vulture, Double-toothed Barbet, African Thrush, Speckled Flycatcher, Blue-spotted Wood Dove and Grey-headed Negrofinch. A visit to Uganda’s Baha’i is worthwhile and rewarding for the curious adventurer.

Other Safari Attractions in Uganda