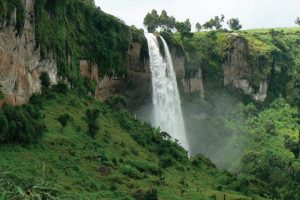 Sipi Falls is a group of three waterfalls situated at the edge of Mount Elgon near the Kenyan border in the Eastern region of Uganda. The fascinating waterfalls are found in Kapchwora district, north-east of Sironko and Mbale districts.

The name Sipi is derived from ‘Sep’ – an indignant medicinal plant that grows at the banks of River Sipi. The highest of the Sipi falls tumbles to the depth below at an altitude of 100 meters; the other two falls are estimated to be 75 and 85 meters high. The aggressive waterfalls surge and tumble over, plunging into the river below.

The stunning Sipi Falls is amazingly the beginning of several hiking trails up the formidable Mount Elgon. A safari tour to the famous falls is an invitation to embark on a climb up the mountain. The most popular route up the mountain begins in Budadiri and then follows the Sasa trail to reach the summit and then descending is through the Sipi trail which ends at the Sipi waterfalls.

The area around the falls is renowned for growing good Arabic coffee which is cultivated by the Bagisu people. The area’s altitude which ranges between 1,600 – 1,900 is ideal for Arabic coffee growth. A coffee tour is another adventure to embark on during a safari trip to the falls. A native guide takes you through the coffee fields and elaborates on how coffee is grown, harvested, roasted, processed and stored. There are a number of organized coffee associations and community projects which present the opportunity of interacting with the natives.

The area around Sipi Falls and Mount Elgon is known for having a climate which is cooler than that of many regions in the country, making it a favorable place for spending a safari holiday and wildlife tour excursion. There are numerous adventures to engage in while in the area including; hiking around the falls and Mount Elgon, nature walks, visiting the caves, craters, Lake Kyoga, rock climbing, birding in the wetland area near the falls, touring the coffee plantations, exploring the Sabiny and Bagisu communities.

Other Safari Attractions in Uganda