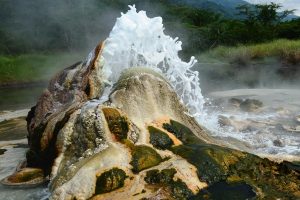 The Sempaya Hot Springs are a remarkable natural attractions found in Semuliki National Park at the edge of the great Ituri Forest on the borders of Uganda and the Democratic Republic of Congo. The name ‘Sempaya’ was drawn from a Kiswahili phrase – ‘sehemu mbaya’ which is translated ‘the difficult side’ owing to the challenges encountered during the construction of the Fort portal – Bundibugyo road along the ridges of the Rwenzori Mountain ranges.

The Sempaya Hot Springs exist as two springs; the male spring and the female spring, found in two separate locations.

The inner female spring is referred to as Nyasimbi by the local Bamaga tribe and is believed to be a sacred location of their female god. The location of the spring is 30 minutes walk off the main road into the beaten forest tracks.

Once at the spring, it is thrilling to see steamy hot water boiling at approximately 103 degrees Celsius, bubbling and jetting out of the ground. Tourists have the honor of boiling eggs and cooking matooke (plantain) in the hot waters. The female spring is invaluable to the local women who go there to offer sacrifices and prayer to appease their female ancestor. The barren ask the female god for fertility and those who are pregnant pray that the mother spirit grants them an easy delivery during childbirth.

The outer male spring is referred to Mumbugu by the local Bamaga and is believed to be the sacred shrine of a male god. The spring is discovered after an hour-long journey into the woodlands. It is associated with wealth and sacrifices are offered by men with the aim of appeasing the male ancestral spirit in exchange for prosperity.

Besides the fascinating hot springs, a Uganda safaris tour to Semuliki National Park has a lot to offer to the adventurer and avid naturalist. The park has numerous attractions; River Semuliki which snakes through the mountains and meanders away pouring its waters into Lake Albert, the great Ituri Forest of the Congo basin, the legendary Rwenzori Mountain ranges, wetlands and woodlands which are a habitat to various bird species and wildlife.

Semliki Wildlife Reserve has 3 main tracks across its Savannah grasslands. The animals to see while driving through include; forest elephants, waterbucks, buffalos, warthogs, Uganda kob, crocodiles and pygmy hippos. Leopards, bush babies, white-tailed mongoose and other night creatures are spotted during nocturnal game drives. The drives are done in the morning, afternoon and night in the company of professional game rangers.

Semuliki has 3 main hiking tracks; Kirumia trail which runs through the forest to Semuliki river, Sempaya nature trail leading to the hot springs and primates, and the Red monkey track which leads to the park’s eastern border where you especially sight the rare deBrazza’s monkey. Semuliki National Park is a great place for the avid naturalist.

A safari trip to Semuliki National Park will give you a chance to encounter the pygmy Batwa who are the native forest dwellers. Before their eviction from the forests to create reserves, the Batwa survived as hunter-gatherers and drew their livelihood – food, medicine, tools and shelter, from Semliki Forest.

Tourism has now become a source of income for the Batwa. Through cultural performances; music, dance and drama depicting their traditional way of life, the Batwa are able to earn some money. A cultural village is currently being built for the Batwa to set up their homesteads.