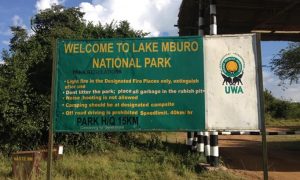 Lake Mburo National Park is one of the top Uganda safari parks popular for walking safaris with a slogan “whispers of the wild”.

Lake Mburo Park is Uganda’s closest safari park from the capital – Kampala just 235km west of the capital. Being one of the destinations popular for short tours in Uganda and part of the long trips in Uganda, here is the most relevant information on location, distance, history, tours, attractions, activities best time and accommodations at Lake Mburo National Park.

The now Lake Mburo Park was initially upgraded as a game reserve in 1963 after being gazetted in 1933 as a controlled hunting area. In 1983, the area was then upgraded to a national park status though was not successful since the residents re-occupied the park after the fall of the second Obote regime in 198, an act that led to killing of wildlife. By 1985, less than half of the parks original land was re-gazetted by the government in 1986.

This is probably why the park is the country’s smallest Uganda wildlife safari park 260square kilometers.

The myth of how Lake Mburo was formed is said by the locals to have been a fateful incident that happened to a man known as Mburo. Mburo had been warned by his brother Kigarama of how he had a dream of the valley in which they lived in flooding but Mburo refused to move. His brother shifted to live in the hills and Mburo was taken by floods that left behind a lake. The lake was then named after him.

The dry season from June – August and December – February form the best time to visit Lake Mburo Park. However, the park is open year round with wildlife viewing possible almost at all times. One can opt for a visit to Lake Mburo National Park with less interruptions however, the disadvantage with this time (March-May and September-November) is that the vegetation is lush, photography is not clear and wildlife doesn’t often collect in the water holes to quench their thirst.

Getting there / how to get to Lake Mburo National Park Uganda

Lake Mburo National Park is about 235km on the fastest route on about 5 hours drive. This is via Mbarara – Masaka Rd and Masaka Rd. From

Mbarara – the closest city to the park, Lake Mburo National Park is 68km on a road drive of about 2 hours.

There are two roads that lead to the two gates of Lake Mburo National Park. One road leads to Nshara gate which is 13km from Lyantonde and the other leads to Sanga gate which is 27km after Lyantonde, both junctions with clear signposts.

Attractions / what to see in Lake Mburo National Park Uganda

Wildlife in Lake Mburo Park
With the parks varied habitat, Lake Mburo Park is home to a variety of wildlife species and these include the Burchell’s Zebra, Warthog, Common eland, African buffalo, Jackal, African Leopard, Oribi, Defassa waterbuck, reedbuck, hyena, duikers, hippopotami and crocodile. In Uganda, the Impala can only be seen in Lake Mburo Park.

The Red-faced Barbet can only be seen in Lake Mburo Park in Uganda.

Activities / what to do in Lake Mburo National Park

Game drives in Lake Mburo Park
The top wildlife safari activity in the park is the game drive where travelers are driven through the park in a 4×4 safari vehicle. A safari ranger will always be helpful on spotting wildlife. Game drives can be done either in the morning or in the evening depending on the preferred time or choice of activity done in the morning. A game drive is the best way of getting close to wildlife like the Burchell’s Zebra, Warthog, Common eland, African buffalo, Jackal, African Leopard, Oribi, Defassa waterbuck, reedbuck, hyena, duikers and many more.

Horseback riding in Lake Mburo Park
In Uganda, there’s no other place to undertake a horseback safari in the park than at Lake Mburo Park. Horseback riding is an awesome way of seeing wildlife without the noise of an engine something that gives more possibilities of seeing the more timid animals. Wild animals that can be seen on a horse ride include the impala, topi, duiker, bushbuck, waterbuck, zebra, elands and buffaloes. Watching wildlife on a horse is very peaceful and a great way to relax on a tour in Uganda with shy wild species like the eland seen at a close distance.

Quad biking in Lake Mburo Park
Quad biking safaris in Lake Mburo Park are operated by African ATV safaris taking small groups of a maximum of 5 people twice a day. Quad biking safaris expose tourists to a beautiful area of varied landscapes with several wildlife species. Some of the wildlife and bird species seen include herds of zebras, waterbucks, topi, families of warthogs, egrets, pairs of crested cranes, black-backed vultures and many more.

Cycling safaris at Lake Mburo Park
The other fun way of getting close to wildlife and seeing animals of Lake Mburo National Park is by choosing to cycle or biking through the park. This is only possible at Lake Mburo Park in all of the Uganda wildlife safari parks. There guided bike rides in the park and wildlife like the antelopes, zebras, buffaloes and many more species.